PreviousBuilding A Disruptive Business Fueled By Kindness with Aron Gelbard
NextCOO Secrets with Stephanie Leung, Co-Founder and COO at Tiney 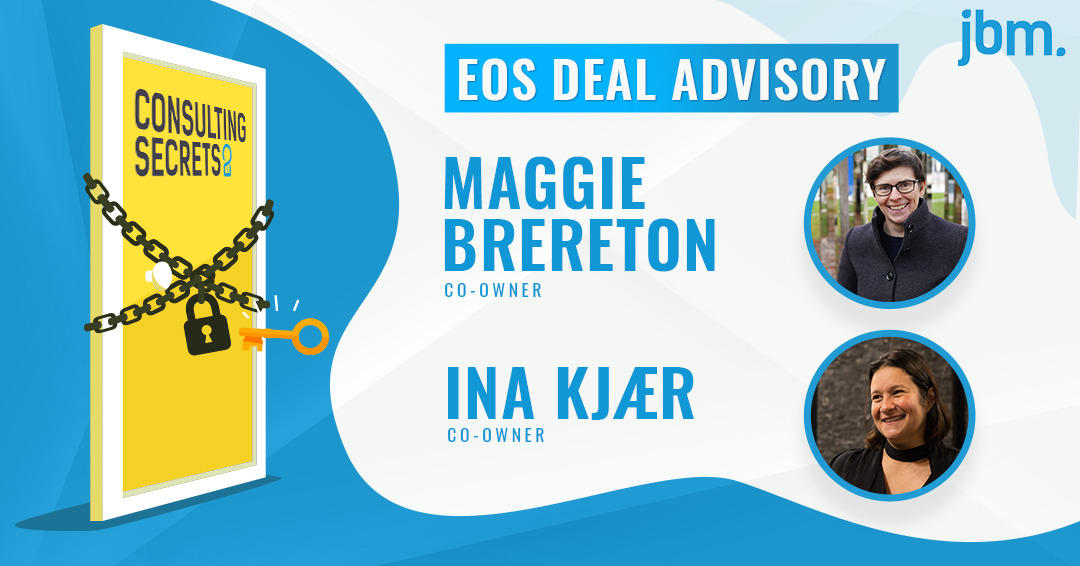 JBM has always worked with a number of entrepreneurial consultancies, in particular boutiques, and have built a great network of inspiring consultants. We wanted to create a series for consultants, to showcase what it’s like to work for a boutique consultancy and what the differences and benefits are.

In each blog, we will be chatting to a consulting leader who will be talking through their journey in consulting as well as sharing advice for people who are thinking about moving from a bigger consultancy to a smaller one.

In this edition we’re talking to Maggie Brereton and Ina Kjaer, the founders of Eos Deal Advisory.

Maggie has worked in deals for most of her career, particularly in deals that are focused on finance as she has an accountancy background and started her career in audit.

After very successful careers at a big 4, they set up Eos a year and a half ago.

Aby: This series is called Consulting Secrets. Can you tell us a secret by yourself a secret about yourself that not many people know?

Ina: That’s a hard question! I think from a professional point of view, my secret would be that I speak a lot of languages, which is extremely helpful in doing some of the projects we work on, especially if sometimes my clients don’t know I speak those languages. I can get a lot of context without them knowing that I actually understand what’s going on and also it helps me enormously develop close relationships with people when I’m able to speak with them in their own language. I think from a personal point of view, my secret that not lots of people know is that I make the best ice cream popcorn on the planet.

Maggie: I can confirm that! Well, 20+ years ago, I used to have a good secret. And that was that I was gay. In those days everybody had to stay in the closet! But since thank goodness we’ve changed those times, that’s no longer a secret. A personal secret is that I do woodwork as a hobby.

Aby: How did you get into consulting? And what interested you in starting your own boutique?

Maggie: I followed a very traditional route in respect of my career. About 25 years ago, when I came out of University, I joined one of the big 4 accountancy firms, I trained as an auditor but left audit because that wasn’t for me, and actually did some fraud investigation, which I really enjoyed. Then I found deals, so I came into the consulting world with deals. In respect of starting our own consultancy, I can’t say I really ever planned it. A situation occurred where Ina and I decided that our positions at our previous employer were untenable. And actually, that’s given us a great opportunity to start Eos and to start our own boutique consulting firm.

Ina: I started in consulting a little bit by chance. I was in France and I’d finished University, and didn’t know where I was going to be, or what I was going to do. So I started off in consulting. For a couple of years, I did all sorts of projects within the management consulting space. I did my first deal probably a couple of years into my career and I completely fell in love with deals and just wanted to do deals for the rest of my life! That really dictated the rest of my career. I was just chasing deals wherever they were; I moved countries many times, but I never changed what I was actually doing. I really like the piece around working with clients over a long period of time. It’s always an honour and a privilege that a client opens the doors of their company to you and lets you come in and help them with something. I’m always in awe of that and I do take it as a huge privilege. In terms of Eos, as Maggie said, it was not a planned choice in our career, although it is a very welcome one. We started Eos because we wanted to make changes in the consultancy market, especially in the deals market, that we didn’t see any of our competitors doing. We felt that the only way to make these changes happen was to start our own company.

Aby: What would you say are the benefits of working for a boutique consultancy versus a larger one?

Ina: The benefits are huge. We feel much more in control of our company as co-founders of a smaller consultancy and we have the responsibility of making, selling and delivering work. We also have the responsibility and pleasure of running the company on a daily basis. It’s all in our hands, we can’t blame anyone if it goes wrong. If you want to win a new client, or do something different, it’s up to us to do that, or make those changes. The decision-making process is much quicker and there’s no politics. Maggie and I have been good friends for many years which helps enormously in how we run the company and how we work. We’re much more agile which was extremely important during the first months of the pandemic. Starting Eos was the best professional decision I ever took in my life.

Maggie: I totally agree with Ina. I’ve not regretted a moment of it, and it’s had its challenges and peaky moments! Overall, it’s just been a huge amount of fun. It’s a really great challenge for us to do with the team we’ve got. One of the best things is that we can change; if we don’t like something, we can change it. As Eos evolves and grows, and how we work changes, we’re just able to adapt so quickly. Whilst if you get stuck in a larger business, it feels sometimes like trying to turn the oil tanker. That’s what I massively enjoy here. We recognise when things are working and we do more of it, and we recognise when things are not working and we just stop and change what we’re doing. That’s the best thing. It’s that sense of empowerment throughout the team as we’ve got more control. And therefore, you make a lot more impact with your clients and on your work.

Aby: What do you think makes a good consultant?

Maggie: I think… actually, that’s exactly what makes a good consultant: thinking. People who know me will be thinking ‘oh, she’s always going on about this!’ I like talking about this because I don’t think we often stop, get sufficient facts and really investigate a situation. There’s a lot of pressure on consultants to come up with answers quickly. I am much more of a consultant who likes to stop, find out the facts, see what we know, what we don’t know, and really think about it. That’s not on an individual basis, but as a team, bringing in different people, different points of view, and really applying some intellectual power to it. I don’t want to just do what we’ve done before or try to be the smartest person in the room coming up with the answer the quickest because I don’t find that’s the best way to advise our clients. For me, it’s always about the stopping and the thinking.

Aby: What is the biggest challenge you’ve overcome in consulting so far?

Was it easy? No. We had tough days but we learnt so much. A lot of the things we learnt through these difficult times; we’ll be able to carry them forever, especially in terms of how we run Eos going forward.

I think professionally I grew enormously. In the last 18 months, I’ve learned so many things, I’ve become so much braver, I’ve met so many people and grew my network so much. Despite it being a challenge, I think it was one that made us better people.

Maggie: I absolutely agree. Just to pick up on the personal aspect of it, the level of personal exposure that both Ina and I, and indeed our team have, is very different to what we’re used to. We used to be part of a big company and part of a big team with a lot of support around you. Now it’s really as individuals, down to us. That’s been a real challenge, but a really great challenge. That’s why we feel that we’ve learned so much. I also feel like as an individual, I’ve grown so much, and that’s great, because at this stage normally in your career, would you be expecting this sudden acceleration of learning and challenge and doing something new? No. But that’s brilliant, because that’s what I really like doing and maybe that was what was missing when we were part of a larger consultancy, rather than really having to go and fight out every day on the street.

Aby: What advice do you have for anyone looking to work in a firm like yours?

Maggie: Give it a go. It’s something very different and I think people really are looking for that new challenge. Nowadays, people are looking to learn new skills. It’s really hard; you can’t underestimate that. But the rewards of it and the satisfaction you get as you start to make less mistakes and learn more, is really great. You might find that you really thrive in this environment. You might find that you don’t, but you won’t die wondering. And I am so pleased that we gave it a go.

Ina: My advice for people thinking about joining a smaller consultancy, is to challenge themselves in terms of what they’re trying to get out of it. As Maggie said, it’s a huge professional growth opportunity, there’s interesting exposure to clients, and more varied type of work, because it’s so much less siloed than a bigger company. But it’s also a bigger challenge. I’d say to ask themselves what they’re looking for and work out how comfortable they are being uncomfortable. I would just question themselves and find out what’s bothering them at the moment if they are working at either a corporate or a bigger organisation, and what they are trying to achieve by joining a smaller consultancy. But overall, it’s a lot of fun and the rewards are huge.

Aby: That was super interesting, thanks so much for chatting to me today! It was a pleasure chatting to you both.

If you want to find out more about Eos, Ina and Maggie, check out their 40 Minute Mentor Episode. 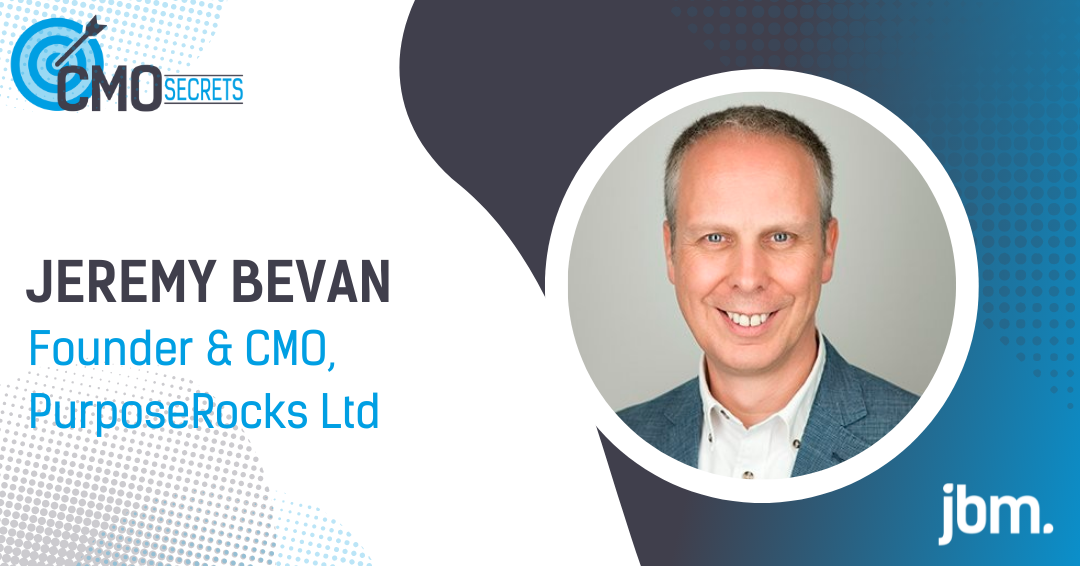 In this CMO Secrets episode, we’re joined by the brilliant Jeremy Bevan, ex VP Marketing of Cisco and Founder & CMO at PurposeRocks Ltd. 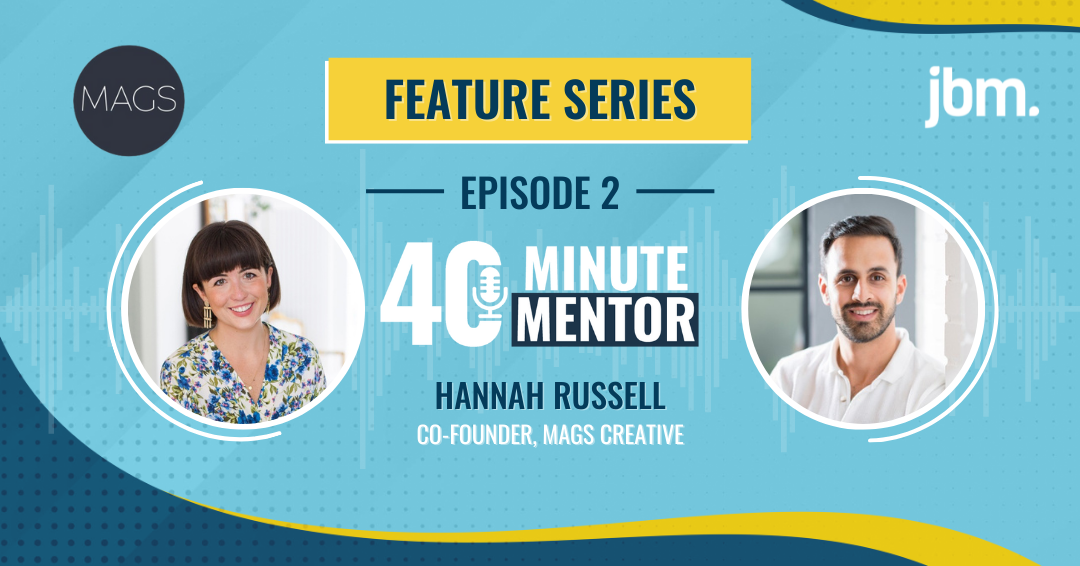 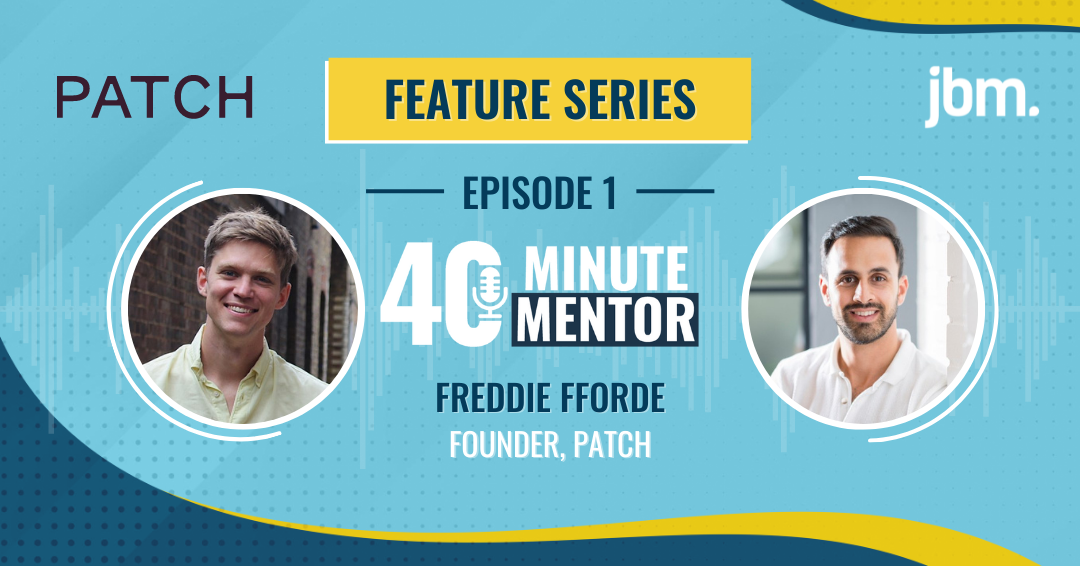 In this episode of our new 40 Minute Mentor Feature Series, we’re joined by Freddie Fforde, Founder of Patch.